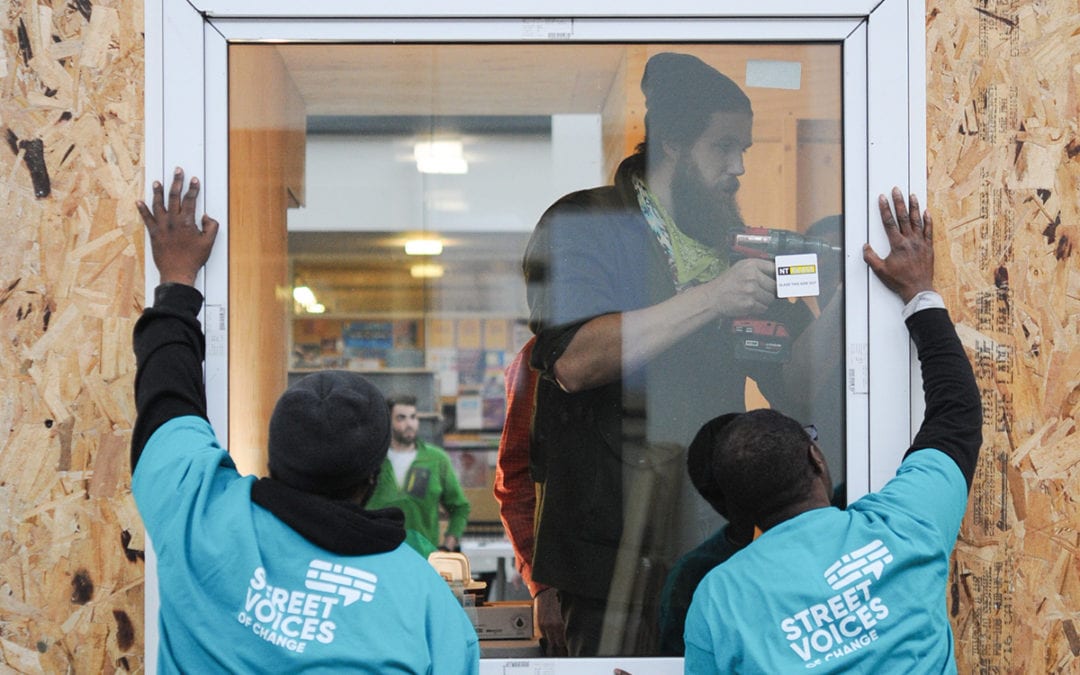 The groups are looking to implement more creative and much less expensive ways to provide accommodations, with dignity and community support.

About 10,000 Minnesotans were homeless in 2018, according to the latest Minnesota Homeless Study by Wilder Research. About a quarter of the homeless are not ending up shelters. Many have to — or choose to — stay outdoors.

At the recent convention of Minnesota architects in Minneapolis, a nonprofit called Settled showed off a model tiny home that the group believes can make a big difference in housing the homeless.

The 100-square-foot house sits on a trailer. The compact abode has an extra-long twin bed, hot plate, refrigerator, heater, sink and toilet. Built largely by volunteers, the mobile dwelling costs only about $20,000 to construct and outfit. That’s less than a twelfth of the cost of an apartment in a typical building constructed for low-income tenants.

“This is our attempt to bridge the gap between emergency shelter and really costly conventional development. A $20,000 home is appropriate for many people,” said Gabrielle Clowdus, a co-founder of Settled.

The nonprofit says it can keep the cost of housing down by avoiding a lot of government bureaucracy and regulation. Its wheeled homes, for instance, aren’t subject to local residential building codes. That means they don’t need plumbing, which can cost tens of thousands of dollars per unit, including permits and labor.

Settled co-founder Anne Franz says the organization will seek donations and sponsorships from individuals and religious and other organizations.

“We also think this will be attractive to the business community as a way to very tangibly contribute to affordable housing, at a price point that makes sense for them,” she said.

Settled plans to partner with churches with a mission of helping the poor. Clowdus says those churches could legally host tiny homes on their property, even if zoning regulations prohibit the homes in the surrounding neighborhood.

“There’s so much untapped land and building space and resources within church congregations,” she said. “We see this not only as a way of infusing church culture with new life and vision but also dying churches with a new sense of purpose.”

Clowdus, an architect and PhD candidate at the University of Minnesota studying housing and homelessness, says formerly homeless people would live side-by-side with parishioners and other people who’ve enjoyed more housing stability in their lives. The goal is to create a supportive community.

Clowdus believes the tiny homes will foster a sense of independence among tenants, who would pay a few hundred dollars a month in rent.

Settled expects to announce the first tiny home settlement next year, after engaging people living in the neighborhood around it.

Another group working on an inventive approach to house the homeless is the Envision Community Collaborative.

The city of Minneapolis recently approved a zoning change clearing the way for Envision to build small free-standing rooming units. The nonprofit collaborative is seeking land for a demonstration project.

The planning and design for the housing was driven by Street Voices of Change, whose some 250 members are or have been homeless.

“People outside our community are just guessing how people in a homeless situation should live,” said Dewayne Parker, an SVOC leader. “Envision was designed by people with lived experience of homelessness.”

The Minnesota Design Center at the University of Minnesota and Alchemy Architects listened to Street Voices of Change in crafting architectural plans for Envision’s first project.

“Fundamental to solving some of these issues is being empathetic and actually listening to people who have different forms of knowledge and different kinds of experiences, said Jacob Mans, an assistant professor at the U of M’s School of Architecture.

Envision’s housing is expected to cost 60 percent less per person than other housing for the homeless. Units will not have their own kitchens or bathrooms. Those amenities will be in a shared common house. And residents will help build the homes, using factory-built panels and modules. There won’t be extraneous space. Overall, the project may have as little as 325 square feet per person. Rents will be pegged to residents’ income.

Wilder Research says homeless people in the state have a median monthly income of $550. Some work. Some get welfare, disability or other government benefits. Some have no income. None of them can afford an apartment.

“In Minneapolis and St. Paul, our average rental ranges between $950 and $1,000 a month, so the calculation just don’t add up,” said Michelle Decker Gerrard, director of the Minnesota homeless Study at Wilder Research. “Having these tiny houses and other types of options are great ideas. think the critical second step would be to make sure that we check in with folks in and evaluate those programs afterwards to find out how they’re working and if we need to make modifications.”

Envision has support from the medical community. Hennepin Healthcare is part of the collaborative effort. Dr. Bill Walsh, a surgeon and advisor to Envision, says housing is critical to health. And keeping people healthy saves money.

“People who are living on the streets need a home to live their healthiest lives,” he said. “But housing is not enough. You have to have a meaningful, accepting community to live in. That’s the other part of Envision Community. It provides a stable community for people where they feel like they can belong.”

There are already tiny-house communities for the formerly homeless in Dallas, Madison, Seattle, Portland and several other cities around the country.

The one that gets the most attention is Community First! Village in Austin, Texas. It houses people in some 500 recreational vehicles and micro-homes. Residents have access to a medical center, grocery store, a couple of theaters and an art shop. Alan Graham is the founder.

In an interview with KUT public radio in Austin, founder Alan Graham described his project as an RV park on steroids.

“It began very simply with the idea that we could lift a brother up off the street into a privately-owned RV park,” he told KUT.

Graham says that the social networking and community structure of Community First! are more important than the housing itself. He says most homeless people have suffered a catastrophic loss of family, and that must be addressed in any community that hopes to serve them.

“We believe housing will never solve homelessness, but community will,” he said. “

But such communities — like other housing for poor people — often run into local opposition.

“The single greatest obstacle is the not-in-my-backyard mentality,” Graham said. ”How do we get people to say, ‘Welcome, yes in my backyard.’”

That’s a challenge both Settled and Envision will almost certainly have to address as their plans proceed in the Twin Cities.

Geoffrey Warner, principal architect at Alchemy Architects, says neither of the two Twin Cities organizations looking to house the homeless in small abodes may provide a perfect solution. But Warner says experimentation is needed if we’re to make some significant progress in providing truly affordable housing.

“It’s important to try these things out and understand that you can’t let the perfect be the enemy of the good,” he said.